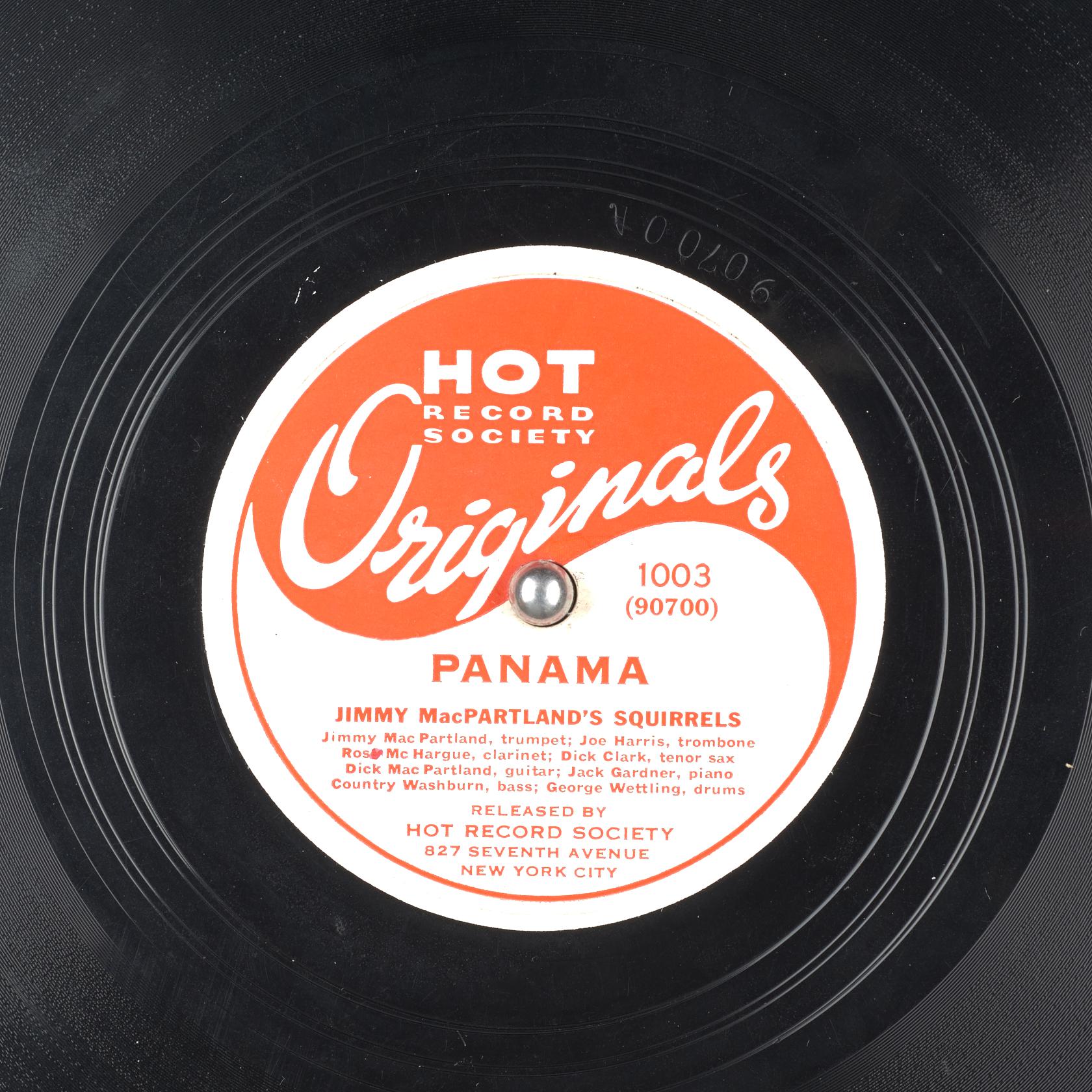 The recording on the other side of this disc: I'm All Bound 'Round With The Mason Dixon Line

These records were made in Chicago in the spring of 1936, under the supervision of “Squirrel” Ashcraft of the Chicago Rhythm Club, and are now issued for the first time on the Hot Record Society’s label. They are unusual sides, made to prove the acceptability of two-beat music today; and the beautiful ensembles in the first half of Eccentric, for instance, ought to prove that Dixieland will be good as long as there are good men to play it. These are good records, and would have been even better if the curiously assorted men had been used to playing together.

Several other musical axes were ground at this date. It was Jimmy Macpartland’s first appearance on wax since 1929, for one thing. The clarinetist, Rosy McHargue, and the pianist, Jack Gardner, are little known in hot circles (McHargue recorded with Trumbauer, and Gardner with Mannone and his present leader, Harry James).The bassist plays a tuba.

Taking these points one by one, we may observe first that MacPartland here plays very much as he always did: in a clear, simple, economical style, with great timing and fine self-possession. In spite of the stories, his lip seems adequate. McHargue is a surprise; he plays lovely Dixieland clarinet (reminiscent of Omer Simeon in the last chorus of Panama), with good tone, line, ideas and phrasing, as well as a special gift for striking solo entrances. Jack Gardner proves to be a more than satisfactory pianist, and his solos on Panama and Eccentric are excellent. Washburn’s tuba is intelligently recorded, at low volume, so that it doesn’t put itself forward unpleasantly. It’s not at all objectionable, though a string bass might have added more swing to the rhythm 8ection.

There’s less to say of the other musicians. Wettling’s name speaks for itself. Clark, who played with the Goodman orchestra at the time, supplements McHargue’s clarinet in its busy counterpoint to the trumpet part. The weakest man in the band is Harris, with his imitative style and uneven playing.

The first half of Eccentric is all ensemble and it’s some of the loveliest Dixie all-in you could ask for. Entirely relaxed, playing in a perfect, esay tempo, the band moves along splendidly behind MacPartland. There follows Gardner’s piano solo backed only by Wettling. A poor trombone chorus then leads back into an ensemble but the band has tightened up, and hits off very weakly to the end.

The One-Step is taken at the proper fast time, opening and closing with good ensembles. Gardner, Clark. McHargue and Harris solo; Mason-Dixon, an unfamiliar tune, has solos by Clark, Gardner and McHargue sandwiched between the ensembles. Panama comes fast, as you would expect it with solos by McHargue, MacPartland, Clark, Harris and Gardner. MacPartland’s trumpet solo, his only one on the session, picks up well after an uncertain beginning but doesn’t compare to his beautiful ensemble work. Catch McHargue’s clarinet in the last ensemble chorus.